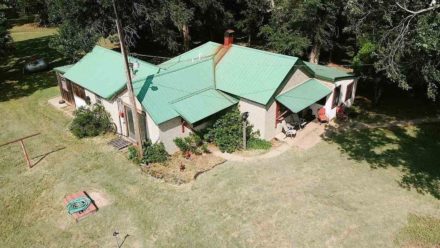 People often called the farms of my Kansas childhood “places,” as in “just past the cemetery you’ll come to the Johnson place.” Novelist Wallace Stegner wrote that such a place “is not a place until people have been born in it, have grown up in it, lived in it, died in it…over more than one generation.”

Four generations of Chinns have owned (and seven have known) a place, a small farm in Kansas. Many were born and grew up on that land, and some died there. In another confirmation of place, when my cousin Karen was a child, she addressed a letter to our grandparents:

And the letter was delivered.

The Chinn farm, located just off the Coats-Sun City road, is hard to find. If you plug the address into a GPS system, you’ll never find the place. It’s hidden. The heart of the farm—the old house, barn, windmill, garage, chicken coop, shed, and silo—lies down in a hollow, concealed about a hundred feet below the main road.

That farm is ground zero for Chinns. My soul’s architecture folds over the undulant contours of the land, the ancient hum of ancestral voices rising from the soil; massive dark thunderheads boiling out of the western horizon; a wedding on the lawn, and the scents of saddles, alfalfa, and machinery.

The house is a hodgepodge of parts hauled in by wagon, drug by horses, or rolled on logs and nailed together. Two of the parts cost my widowed great-grandmother forty dollars. That’s the only construction cost I can find. Yet that house, through various repairs, improvements, and expansions, has been home to Chinns since 1897.

The barn emerged from a similar organic pattern. When a horse killed my great-grandfather in 1900, his four young children had to grow up fast. In 1910, my thirteen-year-old future grandfather, his twin, and their eighteen-year-old brother built the barn. It has now stood as a working barn for more than a century.

The farm gave abundantly over the decades; it was a fruitful place. Grandpa farmed it for sixty years (1917-1977) and Grandma gave birth to twelve children between 1919 and 1936. The fertile land gave generously, but Chinns also poured their sweat and blood on the ground to uphold their end of the deal.

Now, after 136 years of continuous family ownership, the old Chinn place is for sale. These days I find myself walking the ridge between the eras of Chinn ownership and the future, considering the mystery of land and identity.

Land, the most visible dimension on earth, hides in plain sight. Many people walk, drive, or fly over it without even seeing it. But when humans stop, look, and listen; when they take it seriously, that partnership produces wonders. Grass, gardens, and crops, but also houses, highways, workplaces, cathedrals, airports, and cities climb out of the dirt.

A Sense Of Place

We often hear people announce their need “for space,” usually away from sources of pain or the demands of maturity. But, more than space, we need a sense of place. Space is infinite, but place is specific. Space is romantic; place is real as a hammer. We tumble through space, but we stand on a place. Space brings vertigo and disorientation. Place brings experience, confidence, and (eventually) wisdom.

That’s because a place forms an altar where pride and illusions die.

From that altar my grandparents helplessly watched their two-year-old daughter die, struggled with the Great Depression and the Dust Bowl, got kicked in the guts by a wheat harvest of a bushel and a half per acre, and sent three sons to World War II. They spent most of the 20th Century wrestling with Heaven and earth just to pull life from the ground.

“Humus,” the Latin word for soil or ground, is also the root for “humility.” We don’t ever find our place in the world without humbling ourselves. Humility commits. To a woman, to a man. To promises, to a purpose. To a place.

The same story has unfurled in many places; God and a family walked together through a place, a pinpoint on earth. Because weighty things happened there, we have a hardy sense of place. More than that, we were formed by a soaring sense of God.